Discover this gem in the wonderful West of Ireland! 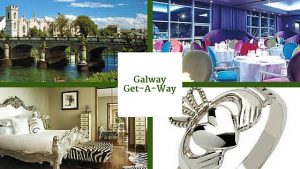 Wanting to discover the world famous Wild Atlantic Way??  Then take a customised trip to Galway one of the seven counties that are part of the world’s longest coastal routes. 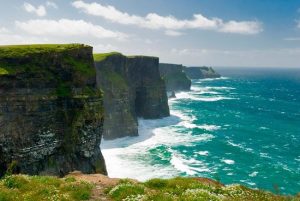 Galway or Gaillimh in Irish, named after a river meaning stony.  It is in the West of Ireland and Galway is part of the province Connacht in Ireland, the largest county in the province.  Galway is known as Ireland’s Cultural Heart (Croí Cultúrtha na hÉireann) and is a vibrant and popular city.

Eyre square is also known as John F. Kennedy Memorial park, renamed in his honour as he famously visited the city just before his untimely death.  There is also a portrait of him in the park along with a statue of renowned Irish language writer Pádraic Ó Conaire.  Take a stroll through the park and enjoy the city hustle and bustle, there’s also the Eyre square shopping centre for some important retail therapy! 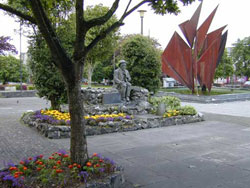 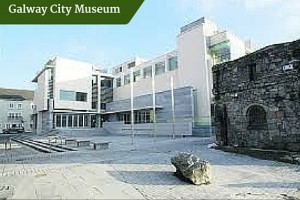 One of the most prestigious of Ireland’s hotels, the  5 star G hotel has an ongoing reputation for luxury.  It was designed by legendary Irish milliner Philip Treacy and his signature style and taste can be seen throughout.  The hotel is central in Galway and boasts a deluxe Spa and gourmet food.  If you want a treat while in Galway this is definitely the place to stay! 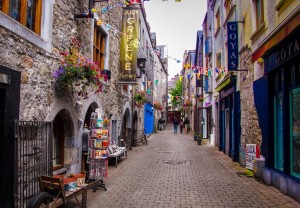 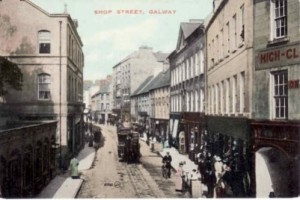 The lively and vigorous Latin Quarter of Galway city has two bridges leading you to it,  Wolftone Bridge and O Brien’s Bridge.  The area is comprised of 13 streets, all filled with shops pubs and restaurants. 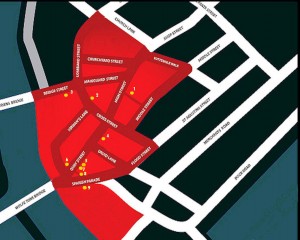 The Latin Quarter is where you can view many of Galway’s medieval buildings, many of the most popular pubs on these streets still have their original features.  Also one of Ireland’s largest medieval churches is found here and is said to be over 700 years old.  Christopher Columbus visited and prayed in this church in 1477.  More unwelcome guests from Cromwell’s army paid the church a visit and destroyed the statues.  The church of St. Nicholas is still used as a place of worship today but there are also tours of it. 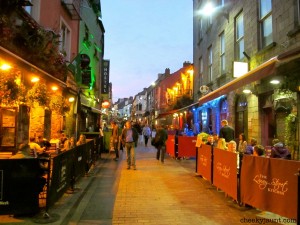 One of the most popular seaside resorts in Ireland and just 3 km from Galway city is Salthill (Bóthar na Trá, in Irish, the road by the sea). It has a 2 km long promenade ‘ The prom’ , it’s tradition that when you’ve walked the length of the prom (with the sea on your left hand side)  you kick the wall at the end of it for good luck.  Just not too hard, you don’t want a broken foot!  Another tradition in Salthill is on Christmas Day to jump into the sea from Blackrock Diving Tower (for charity), with freezing water temperatures at this time of the year, it’s not for the faint-hearted!!

Recent years have seen Salthill grow from a small fishing to a modern, busy resort.  It has many pubs and restaurants but also has Leisureland, a permanant funfair in Salthill with a swimming pool and arcade centre attached.  Many casinos and arcades have also popped up in this intriguing little seaside resort, I imagine to cope with some of the rainy days that Ireland can expect! 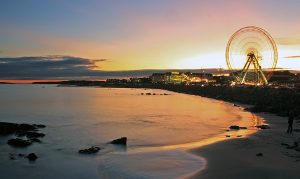 The Aran Islands are a group of three charismatic islands of the coast of Galway Bay, Inis Mór (the largest), Inis Meain and Inis Oírr. The natives of the Islands all speak Irish as their first language but most are also fluent in English.  The islands can be accessed by ferry or by plane.

As cars are not allowed access to the Islands the best way to get around is on foot or bike hire.  With very few cars there the islands are unspoiled and unpolluted, very rare and refreshing nowadays!  There are Bronze Age and Iron Age forts on the islands.  The most prominent of these forts sits on the edge of a cliff on Inis Mór at a height of 330 feet, it towers over the Atlantic ocean.  It’s a spectacular view-point.  The islands are also famous for the traditional Aran jumper (Geansaí Árann in Irish), it’s made from 100% sheep’s wool and is an off-white colour.  A warm keepsake from the islands! 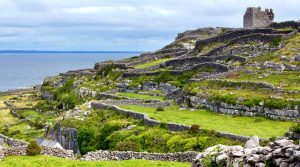 The Sky Road is in Clifden, Connemara’s biggest town,  and gives panoramic views of Galway Bay and islands.  Overlooking the Atlantic it stretches over 14 km of famous views and is known as Ireland’s greatest drives, taking this route is a must to really experience the best of Irish views.

Connemara is home to the well known Connemara National Park.  Much of the park’s land belongs to the Kylemore Abbey estate and it covers just under 3,000 hectares of bogs, woodlands, heaths and of course the infamous 12 Ben (or pins) mountain range.  The park was officially open to the public in 1980 and is an incredible place to hike or cycle.

The alluring Kylemore Abbey is a Benedictine monastery and founded in 1920.  It was originally a castle and the architecture is some what of a Gothic nature, it’s stands at the foot of the Barren mountain and is still a nun’s convent but open for tours.  The Abbey also boasts impressive Victorian walled gardens on it’s land, here there are over 20 green houses, vineyards, orchards with 300,00 trees.  There is also a craft shop and a cafe/restaurant on this splendid estate.  Learn about the history and the Benedictine mission from this active convent.

Connemara, the place Oscar Wilde called a ‘savage beauty’ , it’s known for the mountainous wild rugged surroundings and quiet, serene beaches.  There is history and heritage in every corner of Connemara and something completely bewitching about this unique part of Galway.  It is also home of the magnificent Connemara pony, the pony is strong and rugged and able to endure the sometimes harsh weather conditions of Connemara.  The pony’s charm represents the beauty of the land.   Connemara has also become a backdrop to many famous movies, the renouned Quiet man bridge is featured in the movie of the same name ‘The Quiet Man’ starring John Wayne, all set in Connemara.  Also Marley and Me (Jennifer Aniston, Owen Wilson), Tristan and Isolde (James Franco) and Into the West (Gabriel Byrne) are just a few of the movies that have attracted film crews worldwide.