A unique tour of Ireland must include the Lovely County Limerick in South west Ireland. Limerick City is located in the Mid-West region in the province of Munster. The City lies on the magnificent River Shannon and the River Abbey and is the third most populated city in Ireland. The medieval city was established & founded in 922 by the Normans, but it is most famous as the Lady City or Treaty City.  It was named City of Culture 2014 and with so many hidden gems, take a private chauffeur in Limerick to explore everything this special place has to offer.

Limerick was appointed the name the Treaty City in the early 1690’s, when the Williamite sieges led to the signing of the Treaty of Limerick. In honor of the treaty, the famous Treaty Stone was erected on the further side of Thomond Bridge.  The Treaty Stone is on it’s own by the River Shannon and could easily be over-looked but with an experienced private Irish chauffeur you will not miss any of the important landmarks in Limerick. 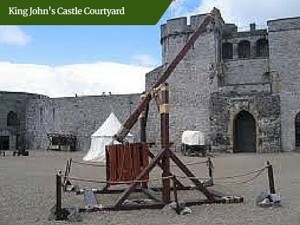 The construction of King John’s Castle was believed to set new standards in the rare formation of it enormous gate house, battlements and corner towers. The tour brings you on a journey via the soldier’s quarters and armory and where you can observe the medieval garrison remnants in the Sallyport area of the castle. The castle guides you to a collection of Viking origin houses that were excavated during renovations some years ago.  A perfect taste of medieval for a family vacation in Ireland.

The Hunt Museum is of historical and state importance as it is the building where a comprehensive private compilation of artefacts delegated to the state are housed. The Museum was established to house John & Gertrude Hunt’s global collection of over 2000 works of art and antiquities.

The Hunt Museum Trust was established in 1974 to store the above properties on behalf of the people of Ireland but it wasn’t until 1997 that the museum was officially opened.

The Savoy offers foodies and drink connoisseurs a selection of four trendy but tastefully decorated restaurants and bars to suite everyone’s tastes. The restaurants focus on using the very best of local produce in Limerick and locally sourcing seasonal ingredients.

The ultimate in relaxation, the Spa at the Savoy offers a vast array of treatments which will leave you feeling replenished and rejuvenated. Treatments at the spa include the Thai massage, know for its benefits of well-being and relaxtion. The spas also offers Ayurveda, an alternative holistic medicine originating from India. It aids in rejuvenating your mind & body and helps with various health issues ranging from allergies to digestive complaints and arthritis.