The Dingle Peninsula: The most beautiful place on the planet.

Let your Private Driver take you to heaven in Dingle!

The Dingle Peninsula (Chorca Dhuibhne, in Irish) is the most incredible and spectacular coastal region in Ireland and also in the world!  It’s surrounded by scenic beauty with immaculate sandy beaches and magnificent mountains, today let’s take a journey to The Dingle Peninsula and discover just a part of Ireland in this unique tour.

The Peninsula is as far west as you can go in Ireland and is positioned at the edge of the great Atlantic Ocean.  The Western end of the Dingle Peninsula is predominantly Irish-Speaking but not to worry, rest-assured that your private driver will teach you a few words ‘as gaeilge’!  It is often jokingly pointed out that the village of Dún Chaoin is “the next parish to America” because the truth in it is that America is it’s nearest neighbour west of it!

When travelling through the Peninsula of Dingle you’ll cross-over the Conor Pass, the highest mountain pass in Ireland.  The breath-taking views there makes the thrilling journey on the winding, twisting roads worth it!  Travel at ease with your experienced driver who has travelled on this pass many times and will let you know when to have the camera ready.

Spectacular View of Slea Head on a Honeymoon Tour of Ireland

The Slea Head drive is a fantastic loop that will bring you to the must-see historical sites, villages and scenic views that this extraordinary Peninsula has to to offer.  The Dingle Peninsula also boasts the second highest mountain in Ireland, Mt. Brandon, a very popular hiking trail. 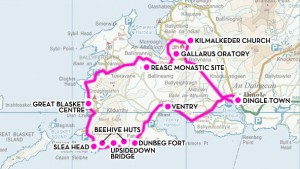 From the very start to the end of this route the views are phenomenal and the incredible Blasket Islands can also be seen in the distance.  There are plenty of places to stop on this route to take some token photographs as a reminder of the best scenery in the world.

Along the Slea Head Drive you’ll come across Beehive huts (or Clochán), this takes you back to prehistoric Ireland and were thought to be once lived in, fitting entire families in these humble dwellings.  They are made of dry stone and the precise date they were erected is difficult for historians to estimate as the same stone corbelling effect was used in Newgrange.  At one point there were 400 of these little homes.

The Gallarus Oratory is thought to have possibly housed foreigners and served as a type of ancient ‘bed and breakfast’.  The Irish name of ‘Gall Aras’ is believed to mean ‘The house or shelter for foreigners’.  Establishing that all tourists are indeed welcome to the Peninsula of Dingle!  Another explanation of why the oratory was built is that was used as a Christian church.  The same type of stone corbelling design that is on the Beehive huts can also be seen on the Oratory. 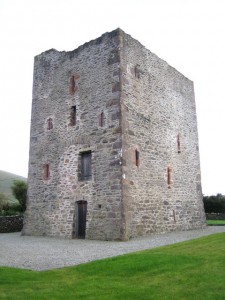 Just a short distance from the oratory is Gallarus Castle, from round the 15th Century and is one of the few surviving castles in the Dingle Peninsula.  The four-story tower has had reconstruction over the last few years and the interior can be viewed.  Similar to the Oratory, the castle is shaped like an upturned boat and is also made with dry stone.

With it’s birds-eye views standing on the edge of the cliff, Dunbeg Fort, is from the Iron Age era and was occupied during times of danger because of it’s secure views over-looking the Atlantic.  As an extra precaution, in case of attack, Dunbeg has an underground passage.  Also on site is a museum, audiovisual room, information and craft room, cafe and restaurant.

Found 2km outside the town of Ballyferriter the Reask Monastic Site are the ruins of an ancient monastery from the 6th Century.  What remains of the site is made of 2 oval enclosures with 10 stone slabs bearing crosses, ogham stones.  The site also has a burial ground, ancient paths, walls of what were beehive huts and remains of oratory are also found on the grounds.  The site is a National Monument and many of the artefacts found on site are exhibited in the nearby museum.

The Blasket Islands are without a doubt something that have to be explored while in the Dingle Peninsula.  They have also been referred to as ‘the Parish next to America’ and the islands were inhabited up to 1953.  To visit the island today however, it looks like it had been abandoned much longer than that and is now home to hundreds of rabbits!  There are 6 islands in total with the largest one named the Great Blasket Ireland.  The beach on this island is the most beautiful I have ever been to, and can only liken it to paradise!  With white sand and clear waters it is one of the most unspoiled beaches in the world. 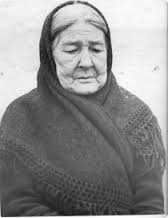 Peig Sayers was a storyteller who lived on the Great Blasket Island, everyone on the island would gather in her house to hear her tales and became the main source of entertainment on the island.  Her stories were later recorded by a scholar and written as an autobiography, Peig.  The remains of her house are still on the Great Blasket Island, it’s fascinating to see all that remains on the island and gives an insight into the lifestyles and lives of the inhabitants.

The Blasket Centre can be found inland and gives a wonderful insight into the inhabitants of the islands, including Peig Sayers.  The centre has fantastic views of the islands and tons of information on them through their wonderful exhibitions.  There is also timetable advice on the boat trips back and forth from the islands.  Peig Sayers infamous autobiography is also available there, along with traditional Irish gifts to purchase.

Now to explore one of the most captivating towns in Ireland, Dingle, Daingean in Irish, which means fortress.  Dingle is a vibrant, bustling fishing village and although geographically it’s small it will hold a massive place in your heart.  During the Summer months the streets are filled and the energy of this town can only be experienced in person.

Dingle Harbour lies in the heart of the town, it is a very busy fishery harbour and shelters all fleets.  On a calm evening the harbour is lovely for a stroll, to stand, breath in fresh Irish and to look out at the choppy Irish waters.  It’s an excellent base for tourists to get to all the nearby excursions, like the Blasket Islands.  One of the most famous excursions in Dingle is to go and visit the most famous resident in Dingle… Fungie the Dolphin!

Fungie the Dolphin is an example of when you go to Dingle you just don’t want to leave, so he stayed!!  Fungie is the most charming resident of Dingle, he arrived in 1983 and was happy to stay and be adored by the thousands of fans who come to Dingle every year just to take his picture.  The boat trips out to see Fungie only have to travel a few minutes to see this intelligent dolphin.  He is very friendly and loves to show off when he sees the cameras!  The town showed their love for Fungie by erected a statue in his honour, this must give him the status of the most famous dolphin in the world!!

If you happen to catch a rainy day in Dingle, which is very likely in Ireland, The Dingle Aquarium, Oceanworld is definitely worth seeing.  They have everything from tropical fish, sharks and even have adopted a giant sea turtle!  It has just opened a reptile exhibits and has some adorable otters who have taken up residency there.  Maybe you’d like to meet some penguins or Nemo?  There’s loads of different species of sea and land animals to keep you occupied, just be careful not to get to close to the sharks during their feeding time!!

You cannot help but feel hungry when you walk through the streets of Dingle, passing all the aromatic seafood smells and local cuisines will be enough to make your mouth water!  There is too big a selection of restaurants in Dingle to name them all in a few sentences but, be warned, that they fill up fast during Summer season so don’t run the risk of going hungry waiting for a free table.  Dingle being a fishing town, the very fresh seafood simply has to be sampled here.

Visiting an Irish pub is practically part of the culture and Dingle is no different!  For every restaurant there is in Dingle, there’s a pub to match.  They all have traditional Irish music continuously playing and the ‘craic’ is non-stop.  Feel free to break out into your best Irish-dancing and join in the fun.  Dingle also boasts it’s very own brewery and makes it’s own lager Crean’s, made from fresh Kerry spring water. 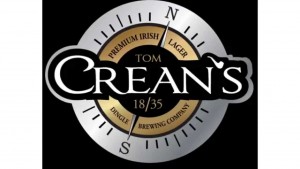 That takes us to the end of tour of the Dingle Peninsula and I hope you enjoyed reading about the most beautiful place on the planet.