A Killer Tour of Kerry, Ireland

Over the years we have been asked about many of the staple vacation destinations in Ireland but none so popular as Kerry. We take a look at what Kerry, and dingle in particular has to offer vacationers who wish to visit this magnificent town.

Kerry is located in the south-west of Ireland in the province of Munster and has a medley of Ireland’s most stunning vistas. Kerry in the Irish language is “Ciarraí” but in more ancient times was referred to as “Ciarraige” which means the “people of Ciar”, a tribe who resided there and the Legendary founder of this tribe was Ciar.

It is the 5th largest county in Ireland and is bordered by Limerick and Cork. Although Tralee is the main town in Kerry, Killarney is one of the most visited tourist destinations in Ireland. Nearby, the Dingle Peninsula, which is the most westerly point of Ireland, offers tremendous scenery from various vantage points.

The Dingle Peninsula is the most northern point of the key peninsulas in County Kerry at Dunmore Head but is considered the most westerly point in Ireland and possibly Europe too. It is known as “Corca Dhuibhne” in the Irish language which means “tribe of Duibhne”, the residence of the area. The entire area is steeped is history, mythology and Irish culture.

Dingle town sits on the Atlantic coast of Ireland and is remarkably close to Tralee and Killarney. It is situated in a “Gaelacht” which means it is an Irish speaking region of Ireland.

The hub of town is Dingle Harbor, which offers some of the most incredible panoramas in Ireland and to truly appreciate its beauty, we would highly recommend a boat journey. If you are lucky, you may even have the pleasure of encountering Dingle Harbors’ most celebrated 20-year inhabitant, Fungi the dolphin.

Of similar beauty and interest is Slea Head, which has one of the most requested sightseeing destinations and film settings, Dunquinn Beach. Movie enthusiasts will be able to walk in the foot steps of film stars and see exactly where the legendary movie, Ryan’s Daughter, was captured. There are some spectacular views nearby but none so impressive as the views overlooking the Blasket Islands.

The Blasket Islands are a group of intriguing islands off the west coast of Ireland which were inhabited by a completely Irish-speaking natives until 1953. A number of books have been written about these fascinating islands and include famous Irish authors such as Peig Sayers: ‘Peig’ and Thomás Ó Criomhthain: ‘The Islandman’.

On a private tours of Ireland itinerary, our Ireland Driver Guides will take you on a mesmerizing & enthralling excursion through the Conor’s Pass Mountains which is one of the highest mountain passes in Ireland. It rises to 456 meters high and connects Dingle with Brandon Bay and Castlegregory.

Inch Beach is a spectacular vista that spans 5 kms of magnificent Kerry landscape. It is also ideal for surfing, windsurfing, kayaking and hand-gliding enthusiasts.

The famine cottages are located in Slea Head and are an incredible example of traditional Irish construction techniques from the early 19th century. They were constructed using mud and stone and usually consisted of two rooms and a loft or mezzanine. The mezzanine was accessed using a ladder. The most remarkable feature of these cottages in their prime was their thatched roofs. In 1860, the Earl of Cork renovated the cottages and replaced the thatched roofs with slate.

The cottages are accompanied by outhouses known in Irish as “Tig na mBá” (cow houses) and “An Stábla” (stables) which were built in 1880. The farm animals were housed in these out buildings during the colder months but you may be surprised to hear that the owners of the cottages kept their farm animals inside the cottages until the household increased. There is a fascinating beehive hut to the rear of the house which was used to house pigs and from which derives the name “Puicín na muice” (pig’s house).

Today the famine cottages are used for working sheepdog performances which are truly entertaining to watch. It takes incredible skill and training on the part of the farmer to gather and control all the sheep movements.

Speaking of huts, the Dun Beg Beehive Huts are an incredible way to spend time in Kerry.

A most unique destination, that we enjoy showing, year-in-year-out, is the promontory fort (1000 BC approx), Dun Beag Fort. Although its exact build date is unknown, it is thought to have been built around the same time as blockhouse forts in Scotland in the Iron age and is resident to the remarkable Bee Hive Huts.

Also of equal interest but unequalled any where else in the world is Gallarus Oratory which is famous for being one of the first churches in Ireland. It is thought to be over 1000 years old and is formed exclusively of dry stone masonry. It is a truly incredible edifice and one that will be a talking point for years to come. 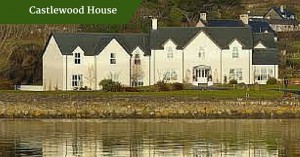 Castlewood House is situated on the waters edge in the most picturesque setting in Kerry and takes complete advantage of the spectacular views in Dingle Bay. It exudes elegance and sophistication in every aspect of the guesthouse with an exquisite mix of old and modern. The guest house if filled with beautiful antique pieces of furniture and awe inspiring pieces of art. 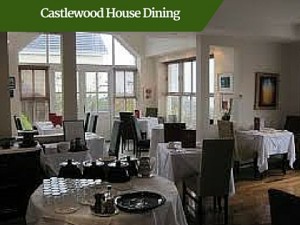 It is very evident from the moment you taste your first bite of food that quality and presentation are of paramount importance to the Castlewood House. Owners, Brian and Helen are at the heart of the kitchen and oversee every meal that leaves it doors.

All ingredients are locally soured in the Dingle Peninsula whenever it is feasible. The hot and cold buffet offers a wide variety of breakfast items from which to choose, ranging from Irish home-made breads, scones, jam & jellies and their infamous bread and butter pudding.

Alternatively, for those looking for a heartier breakfast, the kitchen offers dishes such as Traditional Irish breakfast which includes sausages, bacon, local black and white pudding, tomatoes, mushrooms and eggs. There is also a full Irish vegetarian breakfast option available as well as baby spinach home-made pancakes.

There are two dishes that are worth mentioning because of the remarkable lasting impression they have had on my stay at the Castlewood House. The first is the Blue Cheese Omelet which, (I must add, prior to eating this omelet, I had never eaten blue cheese before), is to absolutely die for.

The other dish, on which I have put my personal seal of approval, is the Toasted Muffin with Local Organic Smoked Salmon; I have never eaten anything quite like it and will make it my business to recommend it to any of our guests staying at the Castlewood House.

Dining out in Dingle

If you would rather dine out then there are a number of superb restaurants in the area that are worthy of praise. Firstly, the Half Door Restaurant is a family run business which specializes in seafood dishes. There is a wonderful selection of diverse fish dishes from which to tantalise your taste buds. You can choose starter dishes such as Fishcakes, Lobster Bisque & Dingle Seafood Chowder. Recommended mains include Baked Blasket Crab Au Gratin, Blackened Fillet of Salmon Couscous Gratin and Steamed Mussels: Garlic, Cream & White Sauce. 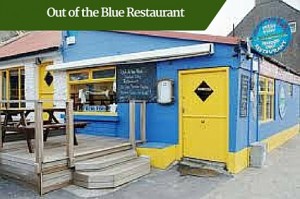 Out of the Blue Restaurant | Private Golf Tours Ireland
– Image curtesy of www.jimcadwell.wordpress.com

Secondly, Out of The Blue Restaurant is an outstanding seafood restaurant that serves fresh fish dishes and menus that change every day offering diners a truly authentic Irish experience. Out of the Blue Restaurant | Private Golf Tours Ireland
– Image curtesy of www.irelandguide.com 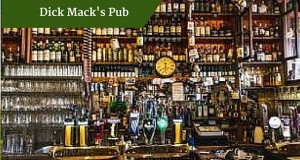 There is also a healthy night-life scene to enjoy Irish music and craic (irish word for fun) on your Private Tours Ireland Package, such as Dick Mack’s Pub which is probably Dingle’s best known pub. It is a very unique place because the original owner (Richard MacDonnell), the current owners father, had a leather shop selling handcrafted goods on the premises of the pub. This shop still operates today offering the very same hand made goods.

It is the epitome of a traditional Irish Pub with old pictures and family memorabilia placed around the pub. The atmosphere is relaxed and light hearted as are the guests who frequent it. Outside, there are Hollywood-type pavement slabs with with the names of famous guests who visited the pub, engraved into them. Some of these well known star guests include Julia Roberts and Sean Connery.

Well that sums up the very best that Dingle has to offer visitors and of course there is so much more to see. If you are interested in booking a tour that includes a day trip to the Dingle Peninsula, then click here to contact Mike Ryan for further information. Alternatively you can toll free from the US and Canada on 1888 793 0416.

Why not check us out what our guests say about our service on Trip Advisor. Just click on the icon below:

If you want to check us out on our social media then click on the icons below: